MATT BAKER BRINGS GOOD FOOD BACK TO THE BASICS

Home › MATT BAKER BRINGS GOOD FOOD BACK TO THE BASICS 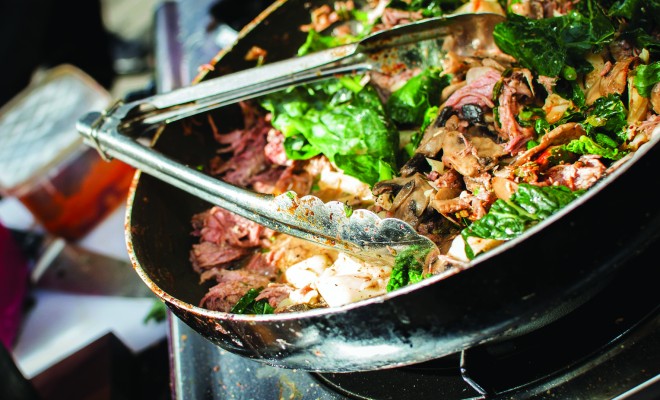 MATT BAKER BRINGS GOOD FOOD BACK TO THE BASICS

Matt Baker is a fully qualified chef with a passion for local, sustainable food. He wants to bring the romance of low and slow back to the way we approach cooking and eating.

Matt wants to help those who are inquisitive about food and who want to know more about growing, sourcing, producing and cooking. To this end, he runs the Whe-Eat Cooking School, Restaurant Appreciation and gourmet regional Food Tours.

Cooking classes are held at the South Melbourne Market and CERES in Brunswick East. He is particularly happy with his collaboration with CERES. He loves it because they practice what they preach. They’re doing the same thing he is doing so it’s a perfect match.

Matt runs classes to help people on their journey to getting back to basics and discovering joy through cooking good food. He offers Mexican, Italian and Sustainable Seafood classes. While there is often meat involved, he also includes a vegan and vegetarian aspect.

Matt wants to help those who are inquisitive about food and who want to know more about growing, sourcing, producing and cooking. To this end, he runs the Whe-Eat Cooking School, Restaurant Appreciation and gourmet regional Food Tours.”

What’s important for Matt is educating people. He says that we have come so far in modern society and we’ve missed a lot of things. There is either a lot of assumed knowledge or people have lost confidence. We’ve left food up to major corporations who have modified it and often taken the soul out of it. Matt wants to encourage people to go back to eating food around the table, being able to talk and share.

Part of the education is about reminding people to eat seasonally and locally. Matt encourages people to avoid the supermarket. Instead, he says, they should go to a farmers’ market and see what’s in season. Those producers only go to market when their fruit and vegetables are in season. Ask the producers about their product, talk to them.

Classes run year round and Matt is also a regular at several of the farmers’ markets in Melbourne where he cooks and sells things a little out of the ordinary, such as goat, to introduce it to the public.

For details on classes, dinners and tours, as well as which markets you can go to and check out how Matt cooks goat, check out the news at whe-eat.com.au